Supports you with Focus & Energy

Energy by Dr. Ed is made with a broad-spectrum CBD with zero THC, and packed with  cannabinoids and specifically selected terpenes. It is developed to naturally support your physical and mental energy levels.
Size 10ml
CBD 250mg (5mg CBD per dose)
THC 0%

This product has been Evnly tested.
Read the full report 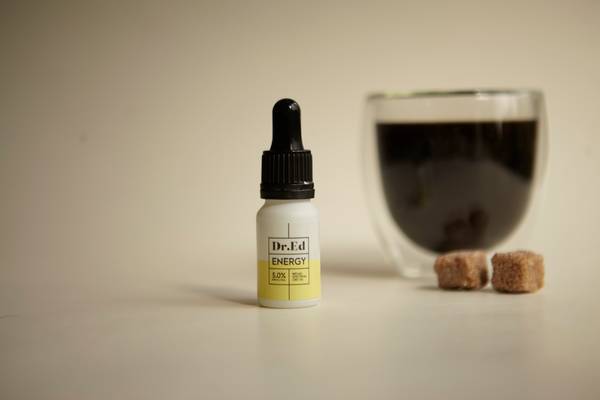 Designed for everyday use. We recommend 4-5 drops, up to three times a day. Take a moment for yourself and hold the drops under the tongue for 60 seconds before swallowing. We encourage you to use this product in a way that works best for you but do not exceed 70mg per day. Remember everyone's bodies are different. Some people report an immediate response, and for others it can take longer.

CBD - a broad-spectrum oil made from a distilate.

Eucalyptol - Commonly extracted from Eucalyptus, it has been shown to have several health benefits including respiratory support. It has a stimulating, spicy scent.

Please allow 1-2 business days for you order to arrive if ordering to a UK address. This product can be shipped to selected countries in Europe which takes 3-5 business days. There is no express delivery option for this product.
To minimise environmental impact, this product is shipped directly from the manufacturer's warehouse with minimal packaging and no delivery slip or invoice.


If you have a medical condition or are taking regular medication, we would advise that you consult your doctor before taking CBD.

This product is not suitable for pregnant or lactating women, or for children.

What We Think
We've found very few CBD products for energy!
We love that this Broad-spectrum CBD has a choice of strengths and is blended with specific terpenes that helps promote energy and endurance.
Vishal
EVNLY TEAM